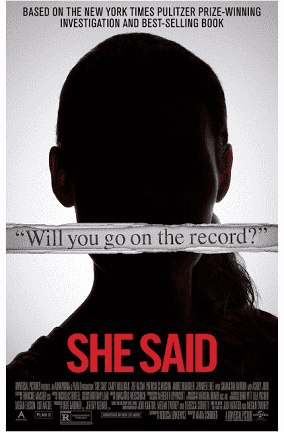 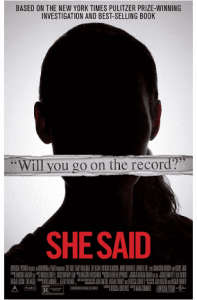 Recently, I was fortunate enough to attend an early screening of Maria Schrader’s film, She Said (2022), hosted by Universal Pictures and Girls on Film. Adapted from the book of the same name, She Said documents the painstaking efforts of two New York Times reporters, Megan Twohey (played by Carey Mulligan) and Jodi Kantor (played by Zoe Kazan) in breaking the story of Harvey Weinstein’s abuses. A necessary story, the film opens a window into a piece of investigative journalism that ignited the #MeToo movement and shattered decades of relative silence around the subject of sexual assault in Hollywood and the wider world.

Focusing largely on the stories of Laura Madden, Rowena Chiu and Zelda Perkins, She Said moves beyond blindly encouraging women to talk, instead honoring the constraints, fears and repercussions that often lead to silence, while celebrating the immense power and disruptive noise that women are able to create when we ‘jump together.’

The themes of isolation and solidarity permeate the film. After a gruelling late night at the office, Jodi expresses her frustration that none of the women are willing to go on record with their accounts of sexual abuse to strengthen the legitimacy of the story. In response, Megan asks whether she would want to jump alone. Conversations between the journalists and victims provide a natural device for exploring the various barriers to speaking out that women face. Unsurprisingly, each of the women express their inability to find jobs after leaving Miramax, and several recount how they were shut out from the industry altogether. Rowena also pinpoints the deep shame that led her to keep the abuse she experienced a secret from her family and her husband for decades, especially as a Chinese woman, speaking to the cultural, social, and economic limitations that affect each woman individually.

Our blood-thirst for a cathartic moment amid the frustrating silence is, surprisingly, satisfied toward the middle of the film, in a scene that takes place in a pub. Megan, Jodi, and their editor, Rebecca (realized in a quietly brilliant and controlled performance by Patricia Clarkson) discuss their findings; when Megan is approached and verbally harassed by a man, she desperately and repeatedly shouts “fuck you!” in front of the bewildered patrons of the pub. Her apology to Jodi and Rebecca is met with a powerful response: “don’t apologize!”, which is a satisfying portrayal of solidarity that holds space for female rage.

The varying degrees of weight and power implicit in female voices extends beyond the frame in She Said. There are several subtly radical moments in which one feels that having a female director and a female screenwriter at the helm of this story was crucial in fleshing out the nuanced emotions of the women at the core of the film.

A minor but significant plot device explores Megan and Jodi’s navigation of motherhood. In portraying late-night moments at the office and last-minute trips abroad, the film could easily have slipped into an arbitrary and typically Hollywood discussion of female sacrifice, and at points I was afraid it would. Instead, these choices are handled as a mere fact of modern life for ambitious working women. While Megan and Jodi’s partners certainly air their frustrations at taking on the burdens of house care, there is a level of support and humor in their interactions that female viewers may find refreshingly resonant and reassuring.

The masterful nature of the film is perhaps most clear in Schrader’s approach to Weinstein’s presence; during his one on-screen appearance, he is reduced to a belligerent, entitled voice on the phone and a faceless balding head in a black suit. It would perhaps have been more conventionally buzz-worthy to have him portrayed as a villain. But this story is not about him, and so his facelessness serves to emblematize the patriarchal shadow looming over workplace power dynamics. Reaction shots are reserved for the women whose stories this film aims to tell. This approach reaches a glorious crescendo towards the end of the film, as Megan is confronted by Weinstein in the office of The New York Times. In a gratifying reversal of what is typical, instead of women’s voices falling on deaf ears, his dialogue is drowned out by an intense and overpowering soundtrack, as the camera moves in and lingers on Carey Mulligan’s reaction. What we can assume is an aggressive barrage of threats is met with quietly assertive indifference, and we get the message that, together, these women will triumph.

Weinstein’s ghostly presence becomes particularly evocative in the sensitive handling of scenes of abuse. The expectation that there will be torture porn-esque scenes of female degradation and humiliation is defeated; instead we are given hauntingly still, yet lived-in spaces, chilling in the absence of human life. An initial montage of empty hotel corridors with closed doors and leftover room-service trays is accompanied by a portrayal of a conversation between Weinstein and one of his victims in which he is attempting coercion. Not just a nod to the “behind-closed-doors” secrecy shrouding assaults; this disparate emptiness speaks more to the nuances of trauma and emotional pain, and does so more effectively than would a barrage of shocking imagery.

Toward the end of the film, Laura’s recounting of her abuse is accompanied by a montage of the hotel room in which it happened. A running shower, steamed glass windows and a robe flung on the bed construct an image that evokes the unshakable trauma of memory through detail. During this same conversation, Laura says that Weinstein took her voice away just as she was about to find it, and this joyless, barren space masterfully represents what has been taken from these women, particularly when contrasted with earlier scenes of their youth.

There’s a gorgeous sequence in which young Rowena and Zelda dance through the night in a Venetian club before watching the sun rise in each others’ arms with a couple of bottles of beer in a square, after the Venice Film Festival. The tangible sense of safety and girlish freedom that these scenes offer provide a stark contrast to the empty corridor in which Zelda later embraces Rowena after her assault. These empty spaces are filled with the women’s voices: they finally speak up, almost six years into the movement.

I had a visceral reaction to this film, which ultimately manifested in a furious charge through the streets of Soho while listening to Rage Against the Machine. It reminded me of the fury I’d felt as a teenager at the beginning of the #MeToo movement). Later, I was shocked when I saw that the film had opened to abysmal domestic box office numbers ($2.2 million from 2,022 theatres, figures that rank the film as one of the worst results for a major studio release). Every woman that I spoke to after the screening had a powerful emotional response to the film, and there was a palpable sense that, both individually and collectively, we had been spoken to in a way that doesn’t often happen in Hollywood.

The sad truth is, if these films don’t prove commercially viable, the stories they offer simply won’t get told. The risk of this story falling on deaf ears pumps blood into the film’s veins, particularly in the concurrent timelines between Weinstein’s accusations and Trump’s election to office following multiple accounts of abuse. It’s easy to encourage women to use their voices, but what the film does, so radically, is to create a space for those voices to be listened to. In the interactions between the female characters and the space between the audience and storytellers, She Said shows us that speaking up is important, but listening is vital. I encourage everyone to see this film and to bring the women in your life with you, because, even if we start by talking quietly among ourselves in the corner of a room, together we can eventually take over the whole conversation.

Editors’ note: This is the first film review published at The Sunlight Press. Let us know what you think as we continue with occasional film reviews in the coming year. Thank you. 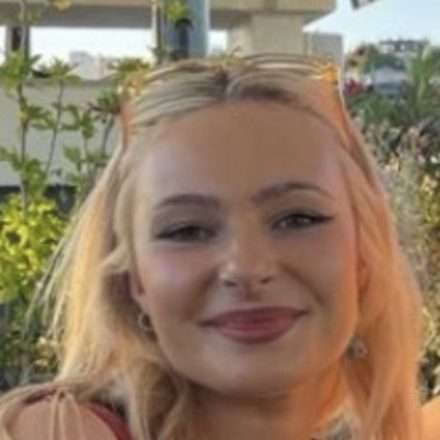 Greta Gard is a graduate of the University of Oxford, with a Masters in Film Aesthetics. Her research interests include psychedelic cinema, a contemporary renaissance in the horror genre, and aesthetics of beauty, representation, and girlhood. She currently works behind the scenes on the Girls on Film podcast, which reviews films from a female perspective.