“It’s back there,” said V, “on the ground behind the train,” and I shook my head because I hoped that wasn’t true. “Go see it,” and she crossed her arms all tough-like, her head up, barely looking at me, like it didn’t matter if I looked or not. When I didn’t answer, she rounded the graffitied train before coming back, holding her nose.

“Yup. It’s there all right.” She shrugged. “What’s done is done,” she said. “It is what it is,” which reminded me of my father.

My father said time doesn’t move one way or another, it unravels all at once.

So, if something’s meant to happen, it already has. The past’s as present as the future, which made me think my mama must be somewhere now, I just couldn’t see her.

What’s done is done. And what will be done is also done and what I’ll see I’ve seen already, so I rounded the train and saw it for myself. She wasn’t kidding. It was once a he and once it had a face. Once, but not anymore, and before long, it probably wouldn’t be an it anymore either. Its arms were mostly gone, its clothes torn from its chest.

“I knew him once,” said V with her head down all sad-like.

When they found my mama in the parking lot, with one last needle in her arm, she’d been there half a day. People parked beside her, loaded their groceries and things on either side. Someone must have seen her: slumped at the wheel, the windows cracked. The last of her being draining from inside. But they kept on going like she wasn’t there, and I wondered if people passed this spot, too, but didn’t notice, or at least pretended not to.

I am here because I’ve always been, but I think someday I’ll be somewhere else. And if I go, then I’ve gone already, I just wish I knew where. But time doesn’t work like that. My mama said she ought to just pack her things and go, but she never did, and I know now she never will. It is what it is, what’s done is done. My father told me: you can free yourself if you know you don’t have to change, you are who you are, and I think that works sometimes but not always.

For a moment, we stood on the tracks in silence because V said he deserves that much, and we sprinkled some rocks on his chest because we’d seen it done at funerals.

I said, “I’m gonna leave this place someday,” and V laughed because she could not see it yet.

Because I didn’t think she was the mama I used to know.

But someday I will run so far, I’ll find her in whatever time she’s in. And I’ll say, “You didn’t really believe me, Mama?” and we’ll keep on running, as far from this time as we can.

Image by Chris F. via Pexels 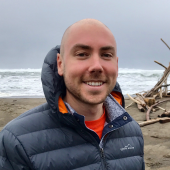 Matt Barrett holds an MFA in Fiction from UNC-Greensboro, and his stories have appeared or are forthcoming in The Sun, Best Microfiction 2022, SmokeLong Quarterly, River Teeth, Contrary, The Forge, Pithead Chapel, and Wigleaf, among others. He teaches creative writing at Gettysburg College.