The first time I saw lightning start a fire, I was barely five. I was standing at the screen door, watching Michigan storm clouds roll when there was a blinding flash and a crack of thunder so explosive, it seemed the earth split open. Lightning struck the backyard ash tree. I was terrified, shaking, crying. My mother ran to scoop me up. We stood in awe at the blackened trunk and a giant arm of the tree, severed to the ground.

From that moment on, lightning was coming to get me.

The next time lightning reached into my life, I was living in Virginia.

My best friend had an older brother who made us both laugh. I was in the fifth grade; he was in the seventh. I quietly admired him. One time in a movie theater, he held my hands during an intense and scary scene. I had a small crush on him afterwards, though it was not reciprocated. He had only wanted to make me feel safe, as big brothers do.

Many years after my family moved away, I heard he was struck and killed by lightning, caught on a beach during an electrical storm. We hadn’t been in touch since childhood, but I had believed, with innocent trust, he would just always be there. The shock of this news traveled through a ground current and up through my body, stopping my heart, educating me on the temporal, random nature of life.

The Canadian prairies were my home for twenty-seven years. In the vast expanse of outstretched land and endless sky, you could see a storm approaching for many miles. I watched lightning flash through eerie green clouds from my apartment balcony on the afternoon a violent F4 tornado stormed through Edmonton. It was the summer of 1987. I hadn’t yet heard about the tragedy: that fifteen people were killed when the funnel cloud ripped through their trailer park on the other side of town. I only knew the storm was beautiful in a fearsome way.

And lightning was still tracking me.

A close strike was imminent, one evening during a humid summer storm. By this time, I was living in the suburbs, deep in middle life’s labor: parenting, working, washing endless dishes. There I was at the kitchen sink, my hands submerged in suds, gazing out the window, lost in thought. Suddenly a familiar sonic boom exploded in my chest – I witnessed lightning strike the neighbor’s garage, setting it on fire. I screamed, yanking my hands from the water, and bolted down the hallway like a frightened deer.

Your chances of being struck by lightning in a given year are maybe higher than you think: about one in 500,000. This, of course, depends on many factors: if you have an outdoor occupation, if you make unsafe decisions to stand under trees in storms, or simply, where you happen to live.

Lightning storms are more frequent in the southeastern states, and I am reminded of this every time I return.

The weather turned wild during a family reunion in a park near the Potomac River. A tropical storm passed through, with blinding lightning and fierce thunder. Not feeling safe anywhere, I sheltered in the central hallway of our rented cabin. I was fifty years old but in that darkness, still a little girl of five.

On Vancouver Island, where I live now, such storms are a rarity.

But a few years ago, an unusual one made an appearance – the kind we used to see on the prairies. An unexpected summer thunderstorm rolled in, painting the sky with dramatic strokes: dark, mountain-blue clouds topped by a band of molten sunset. Lightning bolts forked and flashed, illuminating thunderheads. Gusts of wind rustled trees and shook branches alive.

Sitting on my husband’s hospice bed, I described the brilliant changing sky to him. Cool breezes blew in through the screened window and touched his sleeping face. In the last few hours of his life, the coastal night skies delivered a very fitting prairie farewell. In the storm, he found peace. And there, I reached the end of two stories: the one about us, and a much older one, about a burning ash tree.

Lightning finally found and split my life; it sheared it down the middle.

In my smoldering half-life, I drove myself home and wandered through the back gate. The garden had grown tall and wild in my absence. It had that fresh after-storm smell, and the sky was so blue. 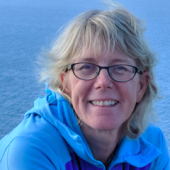 Karin Hedetniemi lives on Vancouver Island where she photographs and writes about nature, quiet inspirations, and being human. Her creative work is published/forthcoming in Prairie Fire, Hinterland, Still Point Arts Quarterly, Moria, Sky Island Journal, Barren Magazine, and other literary journals. Karin won the 2020 nonfiction contest from the Royal City Literary Arts Society. Find her on Twitter/Instagram @karinhedet and her website: AGoldenHour.com.