Enjoy a five days of fiction this week, beginning today with Orange Grove.

“Just as I expected,” Yusef said.

“Just as I tried to tell you,” Ebrahim said.

They walked toward the grove like the oranges had been waiting for them, no change in their pace because after all they had known about the grove all along. They had known that some group of friends would stumble upon some orange grove today. It was as likely as anything that it would be them.

Each man thought of oranges, of his history with oranges, which was long and storied, along with being deeply personal, but in a way that was conducive to being shared. An orange grove was no place for secrets. If a man could not speak freely there, he was possibly lost in a deep and troubling way.

Each man picked an orange and peeled it and ate it in silence.

“This is the way to understand what an orange is,” Ebrahim said. “To walk in the woods through these hills and to come upon an orange grove. This is the essence of an orange. I look at this fruit and I see our whole walk. I understand each step along the way. All of it was necessary to arrive at this place. We made these oranges. We made them in our walk over here. It was never possible that there wouldn’t be an orange grove here. That is how to know the taste of an orange, to have made it ourselves.”

His friends listened and took it in.

“Everything you say is true,” Yusef said. “But I have come closer to the essence of the orange.”

“Yes. It was in Clovis. I was driving one evening and I saw somebody selling oranges. I thought it was an old woman. Then I saw that it was a boy. I stopped at the corner and got out. It was dark and I didn’t think anybody would stop for him this late. When I got close, I saw he had been crying. He said somebody had asked for a box and had run off without paying him. I asked him which way they went. I got in my car and drove off. Well, what are you supposed to do? It was the only thing I could do. I drove around the streets and didn’t see anybody and went back to the boy. I’m sorry, I said. I didn’t see anybody. Thank you for trying, he said. He wanted to give me some oranges. No, I’ll pay, I said. What does it matter now? he said. Take them. He was starting to cry again, but not like a boy. It was something else. He wouldn’t take my money. He made me take some oranges and he stayed there in the dark. That night I ate one of the oranges. It was very good and very sad. Oranges are better than people, I thought. We put them inside us, but they are better than us. Since then it is sad for me to eat oranges, even at a beautiful grove like this.”

They were good friends, and the sadness of oranges did not interfere with the happiness of discovering the grove.

“That is a good story,” Hamid said. “But I believe I have come even closer to the essence of the orange.”

“Closer than that?” Yusef said.

“Yes. I was a young man, and my mother was dying. She had cancer. She had tried many different treatments. The treatments all made her feel worse, and they did not help. One morning she put out fruits and vegetables in the kitchen. She looked at me and said, Hamid, I am going with these. If they help me, that will be good. If they don’t, then that is all. I remember there were grapefruit, watermelon, spinach, beets, and oranges. I remember she said­­­­­­­­–­­–these are what I am going with. They looked like life. They looked exactly like life. They had been life to her. She had always been someone who loved fruits and vegetables, in a way that reflected a deep understanding. They were childhood and girlhood and womanhood. I remember that after she showed me them, I went to my room and cried. It was terrible seeing how alive she was. It was terrible seeing her commitment to oranges. They did not save her, but she died with life in mind. She died with life in mind all the way to the end.”

The men said nothing. Ebrahim and Yusef made a face to suggest that this was indeed the essence of an orange.

They sat for a while and then they got up and continued their walk. They were all old friends and they had done away with the urge to draw any conclusions a long time ago.

Image by InspiredImages from Pixabay 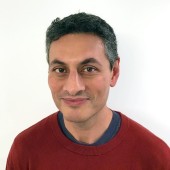 Siamak Vossoughi is a writer living in Seattle. He has published stories in Kenyon Review, Missouri Review, Chattahoochee Review, and Bellingham Review. His first collection, Better Than War, came out in 2015, and his second collection, A Sense of the Whole, was published this month from Orison Books.