When Elissa Altman, one of my favorite authors, was headed to the hospital in late summer for some tests, she tucked one book in her bag: Ross Gay’s The Book of Delights (Algonquin Books, 2019). With such simple and high praise, I went immediately from Altman’s Instagram post and ordered Gay’s collection of essays.

The Book of Delights was my introduction to Gay. He is the author of four books of poetry, including Catalog of Unabashed Gratitude, which won the 2015 National Book Critics Circle Award and the 2016 Kingsley Tufts Poetry Award. His book-length poem, Be Holding, was released in September by the University of Pittsburgh Press.

Originally from Youngstown, Ohio, Gay, 46, grew up next to Levittown, the largest suburb of Philadelphia. A professor of English at Indiana University, Gay earned his bachelor’s degree from Lafayette College. He holds an MFA in poetry from Sarah Lawrence College and a Ph.D. in American Literature from Temple.

What a delight (sorry, but it really is the perfect word) to discover this writer and to spend time talking craft with him for The Sunlight Press.

When I was learning more about you, I thought about the kind of bravery that goes into changing genres. There’s courage in changing direction, in experimentation.

That whole concept of playing. I know I can make a chore out of writing. It sounds like it’s really important to you to play, to not make it a chore, right?

What was on your mind to do with your life when you went off to Lafayette College? 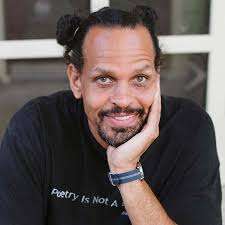 Probably to be a football player because I went to college as a football player. I was a tight end and a defensive end. I wouldn’t have gotten into the colleges I got into if it wasn’t for football because my grades were mediocre. I wasn’t much of a student and I didn’t care much about school. So, yeah, in an unformed way, I thought I wanted to play football after college. I spent a year trying to see if there would be a chance to play football after college. It wasn’t in the cards.

Lucky for me. My brain.

At what point did you start considering poetry?

Was it surprising to you that you went in the direction that you did with your education and your career path?

No, I wouldn’t say surprised, because I came to realize that, when I was playing sports, I was actually engaged in performance. I had an aesthetic relationship to the games that I was playing. In retrospect, I can see that way more clearly. When I look back, I’m kind of like, “Oh, you really had a sense of audience. You really had a sense of rhythm and movement.”  But none of that is to say I knew that I was going to be a writer. Because I didn’t. Because being a writer just wasn’t in my head. But as I look back, it seems like a reasonable thing for that kid to become.

I understand you like to collaborate and be in the energy of people. Why is collaboration important to you?

Talk about your writing practice. I know with The Book of Delights you had rules about writing quickly, writing by hand and doing it daily. Is that true in your writing life in general?

I don’t normally write every day like that. That was a constraint for me because it’s not my way. It’s not my practice so I turned it into a practice. The truth is I get more and less busy, and when I’m less busy I tend to write like crazy. Unless I’m procrastinating. And if I’m procrastinating, not about writing but about other stuff, that’s all I want to do. Poems just start flying out of my head. Like when it’s tax season and I need to do my taxes, I get brilliant.

Right now I’m working on a book with a friend and I am so deep in it. So, every second I can, I sit down and start revising. This morning I was up at 5:30 trying to write a little draft of an introduction. I just finished a bunch of obligations and now there’s a little opening so every second I’m gonna be in this, which is all to say that I think I’m probably a little bit of an obsessive writer. I get deeply engaged. I get deeply involved. And then I’ll stop for a while. I’ll be thinking or just taking notes or very slowly working on something, or not working on something. But I’m definitely not a 6-to-12-in-the-chair person at all.

Do you write by hand?

I often do. I mostly write poems by hand. With prose I’m kind of back and forth. Those essays for the Book of Delights, those were all written by hand. I think I tried to write one on the computer, and it was terrible. I realized I had to handwrite it. The essays that I’m working on now, probably half were written by hand.

What is it about longhand for you?

With poetry—poetry feels like such a bodily art and such a bodily literary art. So, like a line of poetry is a breath. The more embodied we can make the process of the thinking by which the poem, which itself is a kind of like a body, comes into being, the better off the poem is going to be.

You think with your body and you think with your hand. If I write with a pencil versus if I write with a ballpoint pen versus if I write with a LePen versus—on and on and on. I’ll actually think differently. I’ll have different thoughts based on the relationship between the graphite or the ink or whatever and the texture of the paper and how the thing feels in my hand. There are times when I pick up a pen and write with it and I’ll be like that pen doesn’t have the thing in it. This isn’t working out. It’s something about the feeling of those things rubbing against each other. I do spend a lot of time feeling paper. I love a notebook store. I’m always looking for a certain kind of paper and the texture of a certain kind of paper, partly because it gives me a certain kind of embodied experience which I feel like I think well in.

I’m not too caught up in that, but sometimes I will hear people describe my work as “happy.” Happy is great, but there’s this other thing that I’m interested in. Happy might be part of it, but sorrow is certainly also part of it. The thing that I’m interested in, to me, it’s called “joy,” but it might also be called something like “love” or something like “gratitude.” All of it interesting, all of it legitimate. Like I said, I’m not too engaged with a perception, but more of what I’m engaged with is the perception that joy is not rigorous; that joy is not a serious subject. There’s not a more serious subject. That’s the kind of thing that I feel adamant about.

What has been the blessing, so to speak, in the pandemic for you and your writing life?

I don’t have any. But I am certainly acutely aware of how much our touch and our capacity to be together and share air is really life-making. How we are made of our need for each other. So, I feel that there’s a deepening, an amplification of that understanding and that feels really important. It feels like that fundamental need that we’re made of is as clear now, for me, as it ever has been.

On Becoming Your Own Witness

An Interview with Beth Kephart