I grew up poor, and that experience has been enormously helpful to me as an artist. It’s taught me to make the best possible use of the materials I have at hand.

It’s made me an inventive cook, and shown me that the root of gourmet cuisine lies in making palatable meals from substances otherwise barely edible. Think of snails, of all the labor, the stages involved in their preparation—then remember that the ancient Parisians lived in a marsh, in reed huts on stilts, with an abundance of small birds, frogs, and snails.

For fifteen years I supported my family by making and selling patchwork bags in a public marketplace, though I didn’t make much money, never having learned how to ask for enough. I began with worn-out clothing and odd lengths of fabric from thrift stores, but soon other craftspeople began giving me their leftover fabrics. With a larger palette to work with, my art flourished: it lay in the combining of scraps, useless to others, piecing disparate colors, prints, and textures into a new whole.

As a writer, I do the same: I combine scraps of my life, the contents of my brain. I might spin a story out of an overheard conversation and a dream image, or out of a brief flash of painful memory, an unusual given name, and an incident from an Irish folktale. I write patchwork.

For seventeen years I’ve been laboring on a big complex book, often pausing to write stories and other small pieces: in sewing terms, compared to lesser projects I’ve finished and sold, it’s a king-size quilt. Sometimes the sheer scope of the work terrifies me, and then I take refuge in something smaller, something with an end in sight.

The pandemic with its shelter-in-place mandate, which I thought would force me to knuckle down and finish the damn thing, is rich in distractions. For example, though I don’t often sew much—after all those years of earning my living by my ancient Pfaff—I’ve recently been mining the chaos of my sewing room for tightly woven cotton cloth, and producing colorful face masks. I’ve made some dozens, for myself, for my husband and my sister, and for friends and relations at a distance. As my stock of suitable fabrics dwindles, I’ve begun piecing bits together to make, yes, patchwork masks.

Now that I’m engaged in revisions to my big book, my process reminds me more than ever of those years as a fabric artist.

Last fall I went to a small local writers conference. It felt only moderately useful—so much of what goes on at conferences seems to me more masturbatory than productive—but I did pick up a slip of paper about an international online critique group. I emailed a writing sample as requested, and was admitted to the group, many of whose members are active professionals.

Now, finding critique partners has always been difficult for me, especially given the hard-to-categorize nature of my book. My in-person groups have ranged from six at best, four most often, down to nobody but my husband who, though merciless about grammar, is biased in my favor. Indeed, all my partners in recent years are warmly appreciative—desirable in lovers and friends, less so in critiquers.

Worse, helpful as they often are when presented with a new story or poem, they can no longer remember the initial experience of meeting my book. They are no more able than I am to stand back and consider the structure, the shape of it. Immersed for years in its middle and end, as I completed most of a polished draft and then began filling in gaps, they’ve grown so accustomed to wandering around in its bedchambers and attics that they no longer recall the way to the front door, much less how that door looks from outside.

The new critique group, faced with my book’s opening pages, have offered a dizzying variety of possible approaches to rewriting, but are unanimous in saying that the first quarter of the book in its present form is disorienting, off-putting: in short, it’s inaccessible.

My patchwork, when I made my living at it, usually formed front pockets or flaps on shoulder bags or backpacks. The most successful pieces, although made up of irregularly shaped scraps joined more or less at random, resemble paintings: abstract, but often, especially if viewed sidelong, forming magical landscapes.

Once I realized this, I tried to deliberately produce such landscapes, but my attempts always looked clumsy, forced. I had to let them happen.

Sometimes I found myself with a large rectangle of patchwork that, though attractive in all its colors, textures, prints, in its felicitous juxtapositions of fabrics, didn’t quite jell. I could use it as yardage, so to speak, on several small pieces, but if I needed it for the front of a large bag, then I would cut it up, not into neat rectangles, but into triangles, diamonds, trapezoids. Those pieces I’d turn and rejoin at new angles, until suddenly it fell into place: the mountains at dawn, the enchanted forest, the moonlit sea.

Now I’m doing the same thing with this great unwieldy magical book of mine: cutting it up and rearranging the pieces, until they form a shape in which can be perceived, at last, the doorway giving entrance to its realm. Patchwork.

It’s not my fingers I prick now with a misdirected needle; it’s my pride, when I must discard a scene I loved; my heart, as I’m forced to rewrite old pain. But this work, this patchwork, is what I know how to do, and it’s worth doing. 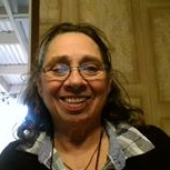 Alison Jean Ash writes feminist paranormal stories, op-eds for her local daily, and occasionally poems, while revising Two Little Girls, a book about her bipolar mother, braiding imaginative biography and memoir with fantasy. She lives in the Pacific Northwest, and is the caregiver for a disabled youth.

A Conversation With Lisa Romeo