About 9 pm on the eve of her 27th birthday in August 1994, Emily Bernard walked into a coffee shop in New Haven, Connecticut. A graduate student at Yale, she was working on a paper and was having a hard time concentrating. She took a seat at a table and settled into write. About an hour later, a man Bernard had encountered on the way into the coffee shop pulled out a knife and began stabbing people. Seven were wounded. Bernard was one of them.

The stabbing “unleashed the storyteller in me,” she wrote in Black is the Body: Stories from my Grandmother’s Time, My Mother’s Time, and Mine (Knopf, 2019). “That bizarre act of violence set me free.”

Bernard conceived this essay collection in 2001 while recovering from yet another surgery on her lower bowel, which was damaged in the stabbing.

“A friend, a writer, came to visit me in the hospital and suggested not only that there was a story to be told about the violence I had survived, but also that my body itself was trying to tell me something, which was that it was time to face down the fear that had kept me from telling the story of the stabbing, as well as other stories that I needed to tell,” she wrote in Black is the Body.

Bernard, a professor of English at the University of Vermont, talked about writing during a FaceTime conversation from her home in South Burlington with writer Annie Scholl.

How did the stabbing unleash the storyteller in you? What do you mean by that?

For me it was the death of a certain layer of fear. When you come face-to-face with your mortality, you realize you have no time. After the stabbing, I tried to resume a normal life, but there’s no more normal life. I had to contend with it and the way I had to contend with it ultimately happened on the page. The assailant’s story ended that night. The rest of the story is mine. It shaped my life. 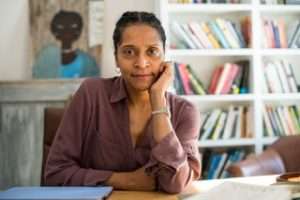 I know writing is part of being an academic, but you’re a writer! Do you identify as a writer?

I think embracing that identity ‘writer’ has been challenging. Toni Morrison never called herself a writer until she was like five books in. So it’s something I’m always aspiring to be. I think about the marathon runners. They don’t go and rest on their laurels for long. You have to get back and train and if you’re a runner, you’re running—and a writer has to write. I can say it’s what I do: I write. For me it’s about working, doing the work every day. When you say, ‘You’re a writer,’ I feel all fluttery in the heart, but there’s something in me that says ‘just keep working’—not in a brutal, you’re-only-as-good-as-your-last-book way. It’s about moving forward and trying to get better all the time.

For you what is success as a writer?

Success is when you know you’ve really gotten it down correctly. In Black is the Body, there are sentences I’m very proud of because of the amount of work that went into them. When I think of them, I’m like, ‘That is a good sentence.’ So I think success is when you feel that you really hit it. You really are telling the truth. And, of course, it’s always nice when you have people respond. Sometimes even the negative responses you receive are affirming because it touched this person and triggered something in them. The worst thing you want is polite applause.

Black is the Body is such a wonderful and important book. It feels like a contribution. Do you feel that? Do you feel like, yeah, this holds up?

I do feel it. Of course we all hope that our books live on, that they don’t fade away. I don’t know what it takes to keep a book alive, but I am proud of it. When I read it in public, I’ll think, ‘I really mean this.’ I mean every comma, every sentence. I’m also aware that it’s so much the luck of the draw. I’m always mindful of that. I’ve had other books I was proud of and not a dog barked. You can predict it (a book’s success) to some degree, but you also can’t. There are so many chance encounters that really contribute to a book’s success. But the success doesn’t take away the daily challenge of sitting down and saying, ‘What I’m doing is important right now. It’s more important than the laundry. I am going to devote time to it.’ Again, I think of Toni Morrison: The attention and accolades are wonderful. It’s so vindicating and it means a lot. But it doesn’t get up and write a sentence for you.

How does writing help you?

Writing is living. Writing is saying, ‘I’m alive. I will not lie down and die.’ It’s breathing. It’s putting one foot in front of the other. It’s the only place where I can make a world that makes sense, where I can make a world that I want to be in. I’m writing to a very specific kind of reader who I hope will get it. One woman wrote me this wonderful little message on Facebook: ‘Are you the one who wrote that piece? It spoke to me in all these ways.’ That is nourishment to me. I think we’re all in search of that when we’re writing—in search of companionship and like-minded people. You have to believe the people are out there. You have to believe in that to keep going. My husband also writes, but I would venture to say that the way I feel about writing is the way he feels about food and cooking. It’s how he says, ‘I’m a human being and these are my values.’ I think writing is about that. It feels like there’s no choice now. It feels like whatever, wherever it’s coming from, it’s about trying to stay present and alive.

You wrote that incredible piece in the New Yorker recently (The Purpose of a House). You wrote about how bits of it were coming to you and how one phrase drove you from your bed to your desk. Even though that piece wasn’t about writing, I liked hearing—and seeing you—in that process.

I was just a mess after Maurice, a writer friend and activist, died. I was feeling so afraid. Everything was happening. And then George Floyd and Christian Cooper and Breonna Taylor and all the other deaths. I was really out of sorts, and a friend and novelist Nell Freudenberger said to me, ‘You need to write something right now.’ I was like, ‘You want an essay? I can’t sleep.’ And I just wrote it. It happened in real time. All night it was just writing itself. . .

In this pandemic and in this global crisis and awakening around racial injustices I had to ask myself, ‘What are my values as a human being? What do I believe in? What do I want to keep saying to the world, to my children?’ We are freed when we tell our stories. Black is the Body, and the book I’m working on now, and the book after that book—it’s a kind of trilogy of remembering—remembering Black women. I’m not interested in famous figures. I’m interested in women for whom, you know, everything didn’t work out like they planned; about a Black woman who filed charges before Title IX, let’s say, and there was no victory for her, no settlement that put somebody in their place. I’m interested in those kinds of stories. I want to ask them, ‘How did you do that? What are your values? How did you hang on to your values when things went awry?’

Writing about my own life is something I’m obviously committed to figuring out and using the stage of the first person singular but I really like writing about other people. I find human beings so interesting. To me, writing is so much about making connections with people. That’s been a thread throughout all of the books I’ve written, and all of the books I’ve been responsible for. They all have allowed me to enter into other identities and experiences. I’m obviously not a single-genre kind of writer. I just keep getting tempted, and that’s really the thread: I get tempted by the challenges of knowing another person. It’s deeply motivating to me, and probably will be my whole life. When celebrities give speeches at the Oscars and say, ‘I thank God’ and ‘I was destined for this,’ I always think, what about the person who didn’t win? What about these other stories that don’t have happy endings?’ I want to honor those women who didn’t get the platform they deserved, and I want to use whatever platform I have now to spread the word.

What is your writing practice and process?

Writing is definitely hard. As my husband said, ‘The only thing harder than writing is not writing.’ What I know to be absolutely, unerringly true for me is that it is a practice. If I let more than a couple days go by without writing I will easily get lost. It’s not worth it. My best days are getting up before the house wakes up to write. Even an hour before the day begins, because then you carry it throughout the day. . . You have to be your own kind of protector and protect the artist inside. It does mean keeping things clearer so your imagination can be wild.

I think a lot about the way I write and it’s about being close to the edge. That piece in the New Yorker took a lot out of me. But I can’t do it any other way. I can’t write safely. I was not built like that. Otherwise my life is fairly conventional: I’m a mom. I live in the suburbs. I drive a Toyota. We have a dog and two cats. But the writing is where I am wild and where I have to free myself. Almost everything I’ve written was directly inspired by another woman writer who was also fearless.

What makes a writer fearless?

A kind of ferocious truth-telling. A defiant, chin-out, kind of truth-telling. There’s no apology. No stuttering. No ‘please excuse me.’ They say what they believe, but they still attend to the art of the sentence. Those are the people I want to be among.