In the crook of the couch’s soft elbow
we are settled in to watch another movie.
A lamp burns in the hallway, its circle of light
like a planet in our house, benign
as the moon. And there are street lamps

glowing through the slats of all the blinds
in the front windows along with porch
lights from other peoples’ houses.

The teenage boy two doors down
is probably shooting hoops in his darkened
driveway and at least one dog is,

without a doubt, being walked. A siren wails
in the distance and grows louder,
then less so, which means it isn’t coming
for our neighbors or for us. We are safe
here and warm, nestled

like small animals in the comfort of our home
even as a million terrors happen outside
our doors, including the barn owl’s

hunt and the mice making a run
for it over an open field and all the rest
of what goes on, night after night,
which we won’t think about until tomorrow.
For now our bodies,

weary from the long day, have let go
of worries. We know the stars are shining
above our roof though we can’t see

them, and the earth is spinning, but we
can’t feel it. We are following
the lives of unreal people doing imaginary

things while we sit rib to rib, hip to hip,
your arm around my shoulders—twenty-six
years of welding one body
to another until we are as inseparable
as conjoined twins, sharing the same heart.

By an old wooden fence, clusters of berries
on the green-leafed Nandina plants were capped
this morning, with fresh-fallen snow. Chili-pepper-
red, the berries’ blush is a startling contrast
to the wedding-dress-white of winter’s latest blast.
For hours, the snow has fallen, each tiny flake
no larger than a dime. How new it all looks, how bold
the berries beneath a sky as white as a snow-covered
field. And all along the sidewalk, the street lamps
have long since lost the heat of their midnight
burning, and the roads are buried as if there are no
roads at all—as though these houses sprung
from the earth like buds unfurling, the way camellias
bloom in bitter cold. Without a soul in sight
the ground opens its freezing arms to the down-tinted,
feathery flecks that will, when the temperature
rises, turn to water. But for now, we are icebound,
the berries a deeper red than they will ever be again. 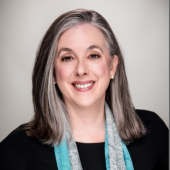 Terri Kirby Erickson is the author of six collections of poetry, including A Sun Inside My Chest (Press 53). Her poems have appeared in “American Life in Poetry,” Asheville Poetry Review, Atlanta Review, San Pedro River Review, The Sun, The Writer’s Almanac, Valparaiso Poetry Review, Verse Daily, and many others. Her awards include the Joy Harjo Poetry Prize and a Nautilus Silver Book Award. She lives in North Carolina. The Nights Were a Wilderness